North America
California island’s water source to be enhanced by SWRO
Catalina Island, CA, potentially facing a mandatory 50-percent cutback in water usage, found some relief by using GE’s advanced desalination technology that will convert seawater into clean drinking water. Southern California Edison (SCE) is expanding its desalination plant on the island with a GE-supplied SeaTech-84 seawater RO (SWRO) system. The containerized desalination system will be configured for continuous operation, treating unusable seawater into a new, clean source of fresh water. The equipment was scheduled to arrive in Catalina in mid-August and made operational in September.

NSF news roundup
NSF International has published a new edition of NSF/ANSI 50: Equipment for Pools, Spas, Hot Tubs and Other Recreational Water Facilities, which evaluates the risk and toxicity of pool chemicals. It also requires testing for trace contaminants in chemicals that are used in the treatment and circulation systems of swimming pools, spas and waterparks. The new edition sets criteria for evaluation and risk assessment of pool and spa treatment chemicals, including the effects of dermal contact, inhalation and ingestion exposures. It specifies the testing requirements for virtually every product used at a recreational water facility. NSF and Australia’s Global-Mark have partnered to provide WaterMark certification, which is required for all plumbing products used in that country. The partnership combines Global-Mark’s expertise in Australian water regulations with NSF International’s experience in testing and certifying plumbing products to national and international standards.

IDE to reopen shuttered desal plant in California
IDE Americas has been selected to refurbish, operate and maintain the recommissioned Charles E. Meyer Desalination Plant in Santa Barbara, CA. It will initially produce 3,125-acre-feet per year (AFY) of high-quality water, meeting 26 percent of the city’s water needs. The plant also has the option to expand to 7,500 AFY and is scheduled to provide potable water by October 2016.

IDA annual conference notes
The International Desalination Association (IDA) reported that attendance at its recently concluded 2015 IDA World Congress surpassed 1,700, with delegates from 63 countries representing Europe, the Middle East, North America and Asia, as well as Russia, Ukraine, South Africa, Côte D’Ivoire, Chile and Argentina. The final program comprised 301 total presentations and 24 sessions, each with two or three co-chairs and nine interactive panel discussions in the Technical Program. The exhibition featured 115 companies from 20 countries. The new Innovation Theater was fully booked, featuring well-attended presentations on new technologies and services from 12 companies around the world. Four hundred middle-school students from the San Diego, CA area were invited to participate in a special Education Day at the World Congress, where they learned about desalination and water reuse, attended a presentation hosted by IDA past presidents, toured the exhibition hall, were welcomed at four booths set up specifically for Education Day and participated in interactive exercises.

Calgon headquarters opened/tariff update
Calgon Carbon Corporation held a ribbon-cutting ceremony in September to celebrate the grand opening of its new world headquarters in Moon Township, PA. In addition, the company announced that the Department of Commerce (DOC) has determined the amount of anti-dumping tariffs to be assessed on imports of steam-activated carbon from China that entered the US between April 1, 2013 and March 31, 2014. Based on the new import tariff rates calculated for the two exporters—analyzed in detail by the DOC (Datong Juqiang Activated Carbon Co., Ltd.) of $0.00/lb and Jacobi Carbons AB of $0.476/lb—the new import tariff rate to be applied to the 13 additional entities that requested a separate tariff rate is $0.476/lb, which replaces the separate tariff rate of $0.018/lb that had been in effect. The import tariff rate to be applied to entities that have not previously obtained a company-specific rate continues to be $1.10/lb.

New reps for Endress + Hauser
Forberg Scientific, Inc. has been named Endress + Hauser’s exclusive representative for Wisconsin and northern Michigan, providing a broad offering of products, services and solutions for all industries, including food and beverage, water/wastewater, life sciences and more. This expands Forberg Scientific’s presence as the premier instrumentation supplier in the Midwest, with coverage in western Pennsylvania, West Virginia, northern Ohio, northern Michigan and Wisconsin. Effective September 1, Eastern Controls, Inc. (ECI) and Endress + Hauser teamed up to provide customers with a single-source supplier for all sales, service and solutions in all markets and industries in the Mid-Atlantic area (metropolitan New York, eastern Pennsylvania, New Jersey, Delaware, Maryland and northern Virginia).

Koch to centralize manufacturing of PURON products
Koch Membrane Systems, Inc. (KMS) announced the centralization of its PURON® product manufacturing at the company’s headquarters in Wilmington, MA, where it develops and manufactures its membrane products. The consolidation will result in significant expansion of the company’s existing production capacity in Wilmington. As an outgrowth of this consolidation effort, KMS has announced the start of a consultation process between its subsidiary, Koch Membrane Systems GmbH, and its Works Council on a proposal to close its Aachen, Germany manufacturing site

Europe
Ecovation divisions acquired by Belgian company
Belgian technology provider Waterleau has completed the acquisition of the anaerobic biological wastewater treatment plant design-and-build business of Ecovation and acquired the membership interests of Krofta Technologies from Ecolab. With this acquisition, Waterleau establishes a strong footprint for the development of its business in the North American market.

Asia
IDE’s MVC evaporators to provide reliable solution
IDE Technologies announced that Bomo Environmental Engineering has purchased two IDE horizontal MVC evaporators to establish a new produced-water treatment facility in Karamay, Xinjian, the first of its kind in China. The facility will also be the first in the country to operate under a build-operate-own (BOO) model. The new facility will treat produced water from Shengli Oil’s Xinchun oil field. Operated under a BOO license for 15 years, it will provide high-quality, boiler-feed water for steam production. 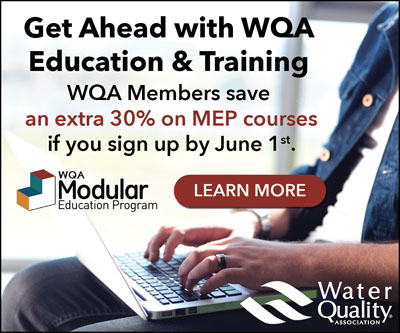